Homelessness Week: How can you help?

This week is Homelessness Week 2020. I know, I know – not another depressing news story! We’re in a pandemic, for goodness sake! And a recession! And Netflix has taken down Mamma Mia! (the movie) AND Sex and the City 2 in the span of a single month. Isn’t that enough combined trauma to see us through the next few decades?

The answer to that is yes. But the answer is also, if your biggest concern in the middle of a pandemic and a recession is that Netflix has (cold-bloodedly) slashed two (iconic and arguably unparalleled) films, then maybe you could spare a thought for those without Netflix, a TV, or to be frank, a home.

Besides, it’s not all bad, I promise. So let’s gently ease into it with some gentle facts:

Okay, so those facts weren’t as gentle as anticipated. New plan of attack: rip it off like a band aid.

Contrary to the popular belief, rough sleepers represent just 7% of all homelessness, nationally. So where are the rest of them staying? The Hilton, maybe? Apparently not. The reason the severity and prevalence of homelessness is often overlooked or unrecognised, is the invisibility of the issue. Homeless people are often hidden, tucked away temporarily on someone’s couch or in their cars, or purpose-built shelters. And you know how science works – if we can’t see it, it obviously doesn’t exist! Blinkers on, everyone!

There are also some choice phrases that come to mind too, often used as an explanation for why someone might find themselves with nowhere to go. Not phrases I personally subscribe to, but apparently four in twenty Australians do – when surveyed, they believed that homeless people were “lazy freeloaders”, “stupid failures” or “not working hard enough”, and that they found themselves in this position as a result of drug or alcohol addiction or severe mental health issues. Ahh yes, nothing like the good old Australian quality of mateship!

It must be nice to feel so secure and far removed from an issue to believe that it may never affect you. Sure, addiction is answerable in some of the cases; but more often than not, domestic violence, housing affordability, unemployment or poor physical health are actually far more likely to push someone onto the streets instead. There have been countless examples of well-paid, well-regarded individuals whose circumstances took a sudden, violent spin and spat them out homeless.

Let’s take a scenario. Jack is diagnosed with cancer. Jack suffers from a chronic disease. Jack has literally any kind of debilitating injury that could halt his ability to work. Now Jack is on the disability pension. But – plot twist – the disability pension isn’t enough to cover their rent – less than 1 per cent of all private rentals are affordable to people on income support. Where does this leave Jack?

Alternatively, we’ve got Jill. Jill has a violent partner whose abuse is not just physical, but emotional and financial. So when Jill finally finds enough courage to flee, she has no money to support her.

Being homeless isn’t a choice. Believe it or not, no one would willingly choose to sleep on a park bench, wash their pits in a train station toilet, or pick through the scraps of a rubbish bin to piece together their dinner. It’s something that happens to people who have no other option.

Now, I did promise that it wouldn’t be all doom and gloom – so let’s get to the happy ending.

Yes, COVID19 has highlighted the severity of homelessness in our society. But it’s also solved it. Or at least, partly. The coronavirus pandemic has forced Australian governments to help people sleeping on the streets more urgently, proving the problem can be solved.

It’s also provided remarkable opportunities for corporate companies to lend a hand. Or more accurately, a (temporary) home. You see, whilst many people have been working from home, thousands of offices have stood empty…and some, converted into makeshift shelters.

Last year, CTC introduced shower packs in our bathrooms. It’s a small gesture, just the basics: toothbrush, body wash, shampoo and a disposable towel. But it’s enough to freshen up and hopefully, cheer up (if you’ve ever taken a long haul flight, you know the spiritual properties of a hot shower).

I know COVID has hit many, many businesses very hard, but if you’re in a fortunate position, it’s something all corporate organisations should consider. If this pandemic has taught us anything, it’s that circumstances can change dramatically in an instant. And as we now know, homelessness doesn’t discriminate. 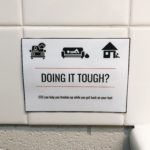 Homelessness Week: How can you help?

This week is Homelessness Week 2020. I know, I know – not another depressing news…

The Story of STORY

Mardi Gras, move over. IDAHOBIT is coming out!

When I discovered that last Sunday was IDAHOBIT Day, my first response was: bless you!…

About us
Our team
Our board

Give us your feedback